Pam Thompson, MS, RN, CENP, FAAN, is chief executive officer emeritus of the American Organization for Nursing Leadership (AONL). Prior to her appointment, she served 16 years as AONL CEO and senior vice president nursing/chief nursing officer of the American Hospital Association. She was responsible for the management and administrative leadership of AONL, as well as the AHA Workforce Initiative and addressing issues specific to strengthening the health care workforce and the redesign of patient care delivery.

Thompson is the recipient of numerous awards including the American College of Healthcare Executives 2009 Edgar C. Hayhow Award for an article she co-wrote about the results of a national survey on chief nursing officer retention and turnover. She also received the California Association of Nurse Leaders Lifetime Achievement Award and National League for Nursing’s President’s Award.

She resides in Manassas, Virginia with her husband, Bob. 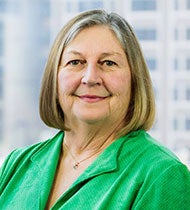